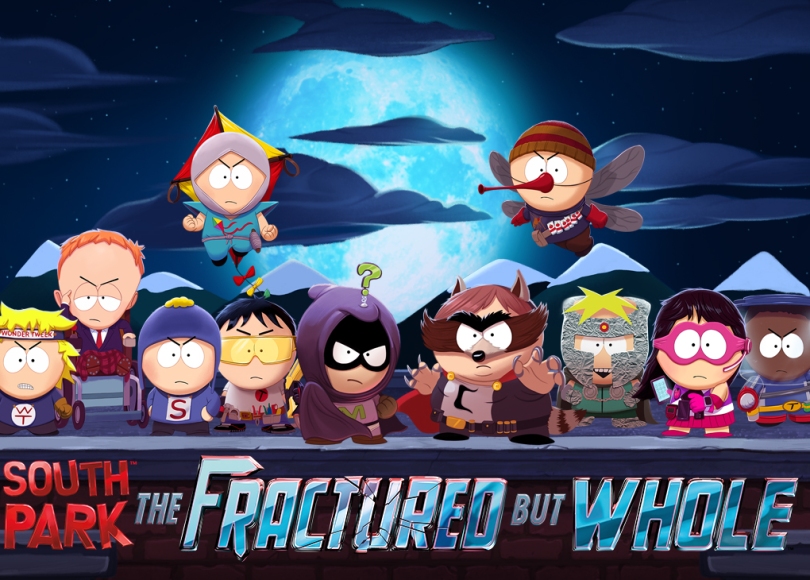 Another trip back down to South Park to meet some friends of mine.

Some spoilers and mature content ahead. You have been warned.

If you ever wanted to know what it feels like to join the kids from South Park on their crazy adventures, while playing super heroes then South Park: The Fractured but Whole is for you. South Park: The Fractured but Whole (TFBW) is the sequel to the very popular South Park: The Stick of Truth (TSOT) game that came out in early 2014. South Park: TFBW takes place literally the next day after TSOT ends and the boys Stan, Kyle, Kenny, Cartman and company decide that they are going to play superheroes. Of course in a town like South Park things never go as expected with the boys having anything but a normal week. All the high jinx of the show find their way into the game with cameos and on going jokes. One of my favorite things about this game is that fact it feels like a very long episode of the television show but one that you are able to engaged in and interact with.

I’ll go over a few things in this review about things this game does really well and the few things it just doesn’t. One pro is the combat, which we will get into in a bit. Second pro for me is the comedy/storyline, you actually feel like you have free range access to the animated town of South Park, including all its off the wall characters. Lastly, it is the ability to customize your character with the looks and powers you want.  Let’s get on with this breakdown and I’ll share some cons later.
As I mentioned earlier the combat is a huge part of this game. It plays just like any role-playing game where a single character activate one at a time.  Combat is played on a turn based system. TFBW adds some different dynamics such as ultimates and super summons of different characters ie: Moses, Ned or Jimbo. All which can help you out in combat. Look for new fart powers (yep you read that correctly) that let you disrupt combat to get some free shots on the enemies or possibly just skip an enemies entire turn. My favorite combat by far though is the boss battles. Whether I was fighting the evil Christmas Critters or Wine Drunk Randy, every boss battle was fun and humorous so I was always couldn’t wait to get to the next boss. One big change from its South Park predecessor was that during combat it is now artifacts that increases your power levels instead of costumes.  Which is a nice change for anyone who would rather want to wear their preferred silly costume instead of feeling forced into something just because it is more powerful.
This is probably the reason you are here in the first place, to talk about the Comedy of South Park. I feel like if you are reading this review and don’t know what South Park is ….well I don’t think you will like/understand this game. It’s OK to leave now. For the rest of you, this game brings every bit of the humor that you love and expect from the show and previous game. One time doing a boss battle, it was literally just Butters and my character fighting against his dad for grounding him. I had a pretty good laugh during that boss battle and that wasn’t even mild South Park humor, if you know what I mean. The recurring characters from the show also help sell the fact that you are truly in the South Park world even when not doing the story missions. Side quests are entertaining too. One of them had me searching for Big Gay Al’s cats. Not to mention all random easter eggs hidden throughout the game. There is plenty here to love for fans.
One last pro for me are the ability to customize my character. TFBW has many options available to the player. I could make my kid look as nerdy or cool as I was able to with costumes I found or made doing game play.  Be prepared though, other kids will be sure to point out how stupid you look. Powers are also very customizable, you start the game only having access to 3 classes with more becoming available as the game play goes on. You are also able to pick and choose which powers from each unlocked class you would like. All which determines what role you play in combat. You are also able to pick which of the neighbor kids can join your fighting party of four. My preferred fighting group usually consisted of Token as the tank of the group,  Kyle for healing and Butters and I completed as the main damage dealers. Not to mention all the artifacts that determine what kinds of stats you can get. Need strength? Pile on the strength artifacts.  Butters also turned out to be a super fun ally…..just saying.
Now I’ll quickly talk about some of the cons. Besides the bosses (which I enjoyed every one of them) there are only a small handful of different enemy types. Once you have played against each type of them the game starts to feel a little repetitive. Luckily combat encounters are such fun, that this doesn’t really hamper the game until after the campaign is finished. Next is crafting. Some people may like this part of the game, I was hoping to be one of them, but I found this part was pretty bland. It felt like a chore and it didn’t have any actual freedom in what I could craft. I mainly just ignored the crafting stage for the most part unless the story points made me use it. Lastly this is kind of a warning but I have heard and read of multiple people having glitches during fights and while exploring. To the point were it froze their characters and they were forced to reset the game. This only happened to me twice in my 20-25 hours of playing and even though it did suck, I usually as a rule, save often, so lucky me!
This is my initial thought based on the hours I have put into South Park: TFBW. Great game that does some things better than TSOT  with some not as great things. For any South Park fan I highly suggest you play this game even if you feel like renting and or borrowing is more your speed. Lets us know what your thought are of the game and if you agree with us. Game on gamers!

Feeling generous, purchase the game through our affiliate link here!