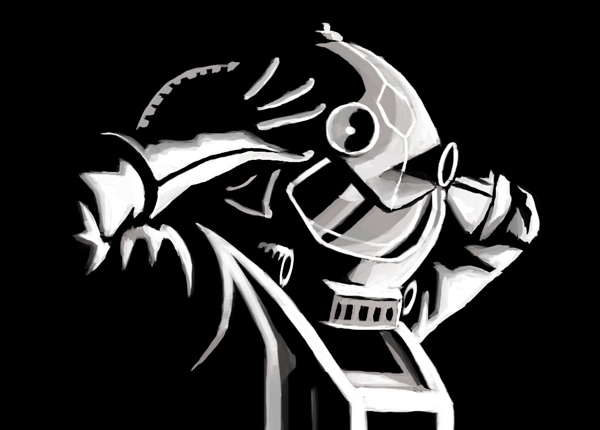 Time for some easy to play and incredibly tense moments running away from aliens in a space station that’s about to explode!

‘Escape from the Aliens in Outer Space’ doesn’t take a whole lot of explaining because the name says it all.  This game, created by Santa Ragion (makers of Fotonica and Mirrormoon) pits up to eight players against each other after being split into two teams. The first team being the humans who only want to escape before the station explodes, while avoiding the horrible fate of being eaten by the second team. The second team of course are the aliens, who just want to snag a good meal before the station blows.

The box for this game is so simple, but contains such a surprise. As I read through the back of the box to get a feel for the game I became more and more assured this was a game for me. Team mechanics without knowing who is on which team, and having to use deduction to figure it out. The pure simplicity, theme and look had me sold. But even after this I pulled out my phone to do a little bit more looking and I find that not only can you get a print and play from the game’s website, but they have a map editor for creating new content and breathing new life into your game!

The basic setup is super easy! Each player is handed a set of maps (which are all dry erase ready), then everybody agrees on which map to play and is dealt a role card which they keep secret. The card will be colored coded for humans or aliens and have symbols for special powers if you’re playing with the advanced rules. At this point you shuffle the noise cards and the escape pod cards, place them where everybody can reach, then start play.

Play goes clockwise around the table with each person recording their moves on the track above each map in their binders. The aliens and humans will start on different spaces and have different goals. The humans want to move as fast as possible towards the escape pods, and the aliens want to eat the humans. The big problem with this is that humans can only one space at a time, while the aliens get two spaces each turn (but the humans make up for it later in the game!).

As you move through the board you will land on either gray or white spaces. On a white space you simply declare silence in all sectors. On a gray space, you draw from the noise deck. There are three outcomes from this, all of which are only known by you. First you could get a red card, which means you must declare a noise in the space you are in. The second is getting a green card, which lets you declare a noise in any space to throw others off your scent. The last card type is white, which is just like a white space, silence in all sectors. Unless you are a human (here’s the advantage against the aliens). The humans can use the silence cards as items which are identified on each card which will help them elude the aliens.

When an alien player thinks they’ve tracked down a human, all they have to do is declare an attack in their space rather than drawing a noise card or declaring silence. If you were wrong, good job! Everybody now knows where you are and can avoid you. If you were right however, you just had human for lunch, and you’ve also gained a teammate. Yes humans that get eaten become aliens themselves and start looking for their own meal. But what happens if there was an alien on the space? Well, unfortunately in that case, you would still get lunch, but that player would be out of the game as aliens don’t respawn.

When a human finally makes it to a pod it isn’t guaranteed that they will escape, first they must draw from the pod deck. And just when you think you’ve made it out, you draw the malfunction card instead. At this point it’s probably a good time to panic because all the aliens now know where you are, good luck!

Overall I think this is a fantastic game that plays well with 5 or more people, any less than that and it just doesn’t work for me. I would highly recommend giving it a try with the print and play. Then if you like it, get the full on edition.

Help support this site, yourself and the game makers, by purchasing this game
from our affiliate link.